Projeto Brasil! is a Nordic collaboration around the music from the creative music scene in Brazil during the 60s and 70s: Bossa Nova, Samba and MPB (Música Popular Brasileira).
It’s a tribute to composers like Antônio Carlos Jobim, Milton Nascimento, Vinícius de Moraes and their peers. These songs changed and reshaped music, and made Brazil and its culture the next, hot, new thing around the globe. Born in the intersection between jazz, classical and popular music, mixed with the rich afro-Brazilian heritage. It’s music that feels as fresh and relevant today as it did back then. 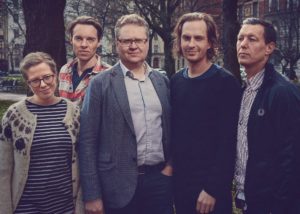 Sigurdur Flosason och Hans Olding met in Denmark a couple of years ago when they participating in a Nordic jazz workshop and has continued to work together ever since, playing together and touring clubs and festivals in the Nordic countries.

They have written new music and arrangements of some of their favourite songs for a hand picked quintet, where their strong jazz backgrounds meet the Brazilian classics. Found in the quintet are some of the most interesting Nordic musicians today. The result: an exciting blend of tropical rhythms and grooving jazz with a large chunk of Nordic melancholia added to the mix.

Sigurdur Flosason is one of the most active and important musicians on the flourishing Icelandic scene. After jazz and classical studies on Iceland and in the US he has recorded over 20 records under his own name, as well as touring around the world with different projects. He composes regularly for everything from smaller jazz groups to big bands and is regularly a featured soloist with the Icelandic Symphony Orchestra and Reykjavik Big Band. Sigurdur is also head of the jazz department at FIH, Iceland’s leading jazz music school. He’s been nominated twice for the Nordic Council Music Prize and has won five Icelandic Grammys.

Hans Olding, trained at the Royal College of Music and the Paris Conservatory (CNSM de Paris). He has played and toured several continents with musicians from all over the world, and has released four well-received CDs for El Dingo Records. He writes music and plays with several groups, together with some of Sweden’s most renowned musicians. He also runs a number of exciting projects together with musicians in Europe, including France, Italy and the Scandinavian countries.

“Olding’s playing is solid on every tune.” wrote American All About Jazz in a record review, and recently Italian AAJ: “Olding has the ability to express his original voice, with its own peculiarities and with a narrative development that is increasingly interesting, even playing it back over and over again”.